What would Dijkstra do? Proving the associativity of min

This semester I’m teaching a Discrete Mathematics course. Recently, I assigned them a homework problem from the textbook that asked them to prove that the binary

You might like to pause for a minute to think about how you would prove this! Of course, how you prove it depends on how you define

The book expected them to do a proof by cases, with some sort of case split on the order of

. What they turned in was mostly pretty good, actually, but while grading it I became disgusted with the whole thing and thought there has to be a better way.

I was reminded of an example of Dijkstra’s that I remember reading. So I asked myself—what would Dijkstra do? The thing I remember reading may have, in fact, been this exact proof, but I couldn’t remember any details and I still can’t find it now, so I had to (re-)work out the details, guided only by some vague intuitions.

using a calculational approach. Dijkstra would also advocate using a symmetric infix operator symbol for a commutative and associative operation, so let’s adopt the symbol

would also be a reasonable choice, though I find it less mnemonic.)

How can we calculate with

? We have to come up with some way to characterize it that allows us to transform expressions involving

into something else more fundamental. The most obvious definition would be “

otherwise”. However, although this is a fantastic implementation of

if you actually want to run it, it is not so great for reasoning about

, precisely because it involves doing a case split on whether

. This is the definition that leads to the ugly proof by cases.

How else could we define it? The usual more mathematically sophisticated way to define it would be as a greatest lower bound, that is, “

if and only if

is the greatest such number, that is, for any other

.” However, this is a bit roundabout and also not so conducive to calculation.

My first epiphany was that the best way to characterize

is by its relationship to

. After one or two abortive attempts, I hit upon the right idea:

That is, an arbitrary

is less than or equal to the minimum of

precisely when it is less than or equal to both. In fact, this completely characterizes

, and is equivalent to the second definition given above.1 (You should try convincing yourself of this!)

But how do we get anywhere from

be arbitrary; we calculate as follows: 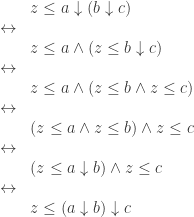 Of course this uses our characterization of

via its relationship to

, along with the fact that

is associative. Since we have proven that

if and only if

16 Responses to What would Dijkstra do? Proving the associativity of min