Today I’d like to talk about generating random trees. First, some imports and such (this post is literate Haskell).

So here’s a simple type of binary tree shapes, containing no data:

We’ll count each constructor (Leaf or Branch) as having a size of 1:

Now, suppose we want to randomly generate these trees. This is an entirely reasonable and useful thing to do: perhaps we want to, say, randomly test properties of functions over Tree using QuickCheck. Here’s the simplest, most naïve way to do it:

We choose each of the constructors with probability

, and recurse in the Branch case.

Now, as is well-known, this works rather poorly. Why is that? Let’s generate 100 random trees and print out their sizes in descending order:

As you can see, this is a really weird distribution of sizes. For one thing, we get lots of trees that are very small—in fact, it’s easy to see that we expect about 50 of them to be single leaf nodes. The other weird thing, however, is that we also get some really humongous trees. The above output gets randomly regenerated every time I process this post—so I don’t know exactly what sizes you’ll end up seeing—but it’s a good bet that there is at least one tree with a size greater than

. To get an intuitive idea of why this happens, imagine generating the tree in a breadth-first manner. At each new level we have a collection of “active” nodes corresponding to pending recursive calls to randomTree. Each active node generates zero or two new active nodes on the next level with equal probability, so on average the number of active nodes remains the same from level to level. So if we happen to make a lot of Branch choices right off the bat, it may take a long time before the tree “thins out” again. And if this distribution didn’t seem weird enough already, it turns out (though it is far from obvious how to prove this) that the expected size of the generated trees is infinite!

The usual solution with QuickCheck is to use the sized combinator to limit the size of generated structures, but this does not help with the problem of having too many very small trees.

Here’s a (seemingly!) stupid idea. Suppose we want to generate trees of size approximately 100 (say, within 10%). Let’s simply use the above algorithm, but with the following modifications:

The ReaderT holds the min and max allowed sizes; the StateT holds the current size; the MaybeT allows for possible failure (if the tree gets too big or ends up too small), and the Rand StdGen is, of course, for generating random numbers. To run a computation in this monad we take a target size and a tolerance and use them to compute minimum and maximum sizes. (The (??) in the code below is an infix version of flip, defined in the lens package.)

Here’s the code to try generating a tree: we call the atom function to record the increase in size, and choose between the two constructors with equal probability. atom, in turn, handles failing early if the size gets too big.

genTreeLB calls genTreeUB and then performs the lower bound check on the size.

Let’s make sure it works:

Neat! Okay, but surely this is really, really slow, right? We spend a bunch of time just throwing away trees of the wrong size. Before reading on, would you care to guess the asymptotic time complexity to generate a tree of size

And while you think about that, here is a random binary tree of size approximately 1000. 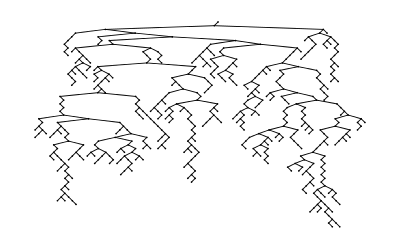 And the answer is… it is linear! That is, it takes

time to generate a tree of size

. This is astounding—it’s the best we could possibly hope for, because of course it takes at least

time to generate an object of size

. If you don’t believe me, I invite you to run some experiments with this code yourself. I did, and it sure looks linear:

The proof of this astounding fact uses some complex analysis which I do not understand; I wish I was joking. Of course, the constant factor can be big, depending on how small you set the “epsilon” allowing for wiggle room around the target size.1 But it is still quite feasible to generate rather large trees (with, say,

There is much, much more to say on this topic. I just wanted to start out with a simple example before jumping into more of the technical details and generalizations, which I plan to write about in future posts. I also hope to package this and a bunch of other stuff into a library. In the meantime, you can read Duchon et. al2 if you want the details.