At Hac Phi a few weekends ago (which, by the way, was awesome), Dan Doel told me about a certain curiosity in type algebra, and we ended up working out a bunch more details together with Gershom Bazerman, Scott Walck, and probably a couple others I’m forgetting. I decided to write up what we discovered. I have no idea what (if any) of this is really novel, but it was new to me at least.

represents the unit type, sum is tagged union, product is (ordered) pairing, and so on.

, since product represents pairing, we can write

values. Well, how about unordered

values? Since there are

values, it seems that perhaps we could somehow divide by

to "quotient out" by the symmetries we want to disregard:

If you’ve never seen this sort of thing before it is certainly not at all obvious that this makes any sense! But bear with me for a minute. At the very least, we can say that if this is to make sense we ought to be able to use these sorts of type expressions to calculate the number of inhabitants of a finite type. So, let’s try it. For now let’s take

. I’ll draw the elements of Bool as

There are clearly four different ordered pairs of Bool:

is supposed to represent ordered

. How about unordered pairs? Since we don’t care about the order I’ll just choose to canonically sort all the

s to the front, followed by all the

s. It’s not hard to see that there are three unordered pairs of Bool:

(To distinguish them from ordered tuples, I’ll draw unordered tuples as above, with the elements slightly separated and a gray circle drawn round them.)

However, when we substitute

The problem is that

is only correct if all the values in the tuples are distinct. Then we overcount each unordered tuple by exactly a factor of

many permutations of the tuple, each of which is distinct as an ordered tuple. However, when some of the tuples have repeated elements, there can be fewer than

(As a small aside, when working in the theory of combinatorial species one is concerned not with actual data structures but with data structure shapes full of distinct labels—and the fact that the labels are distinct means that

is (in some sense) actually the correct way to talk about unordered tuples within the theory of species. More on this in another post, perhaps.)

is not the correct expression for unordered tuples, what is? In fact, Dan started off this whole thing by telling me the answer to this question—but he didn’t understand why it is the answer; we then proceeded to figure it out. For the purposes of pedagogy I’ll reverse the process, working up from first principles to arrive at the answer.

The first order of business is to count unordered tuples. Given a set

-tuples are there with elements drawn from

(where repetition is allowed)? Again, since the order doesn’t matter, we can canonically sort the elements of

-tuple with elements drawn from

Now imagine placing "dividers" to indicate the places where

(Note how there are two dividers between the last

, indicating that there are no occurrences of

.) In fact, given that the elements are canonically sorted, it is unnecessary to specify their actual identities:

So, we can see that unordered

-tuples with elements from

correspond bijectively to such arrangements of eight dots and three dividers. In general, unordered

-tuples are in bijection with arrangements of

dividers, and there are as many such arrangements as ways to choose the positions of the

dividers from among the

total objects, that is,

(As an aside, this is the same as asking for the number of ways to place

indicate the multiplicity of element

-tuple. This is #4 in Gian-Carlo Rota’s "twelvefold way", and is discussed on page 15 of Richard Stanley’s Enumerative Combinatorics, Volume I. See also this blog post I wrote explaining this and related ideas).

And now for a little algebra: 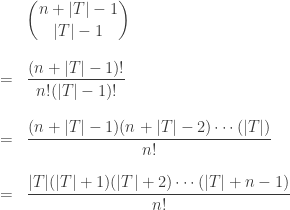 .) In the end, we have discovered that the number of unordered

, which looks surprisingly similar to the naïve but incorrect

. In fact, the similarity is no coincidence, and there are good reasons for using a notation for rising factorial similar to the notation for normal powers, as we shall soon see.

And indeed, the correct type expression for unordered

-tuples of values from

. This means that if we consider the set of ordered

-tuples where the first element is drawn from

, the second element from

plus some extra distinguished element, the third from

plus two extra elements, and so on, there will be exactly

of them for every unordered

-tuple with elements drawn from

. (In fact, we would even expect there to be some nice function from these "extended

-tuples such that the preimage of every unordered

-tuple is a set of size exactly

—just because combinatorics usually works out like that. Finding such a correspondence is left as an exercise for the reader.)

Before we get back to talking about

is a falling factorial. What (if anything) does it represent?

Subtraction of types is problematic in general (without resorting to virtual species), but in this case we can interpret

-tuple with no duplicate values. We can choose any element of

And now for some fun. If we sum

, it ought to represent the type of unordered tuples with distinct values of any length—that is, the type of sets over

Can we find a more compact representation for

This is a discrete analogue of the familiar (continuous) differentiation operator from calculus. (For a good introduction to discrete calculus, see Graham et al.‘s Concrete Mathematics, one of my favorite math/CS books ever. See also the Wikipedia page on finite differences.) For our purposes we simply note that

(proving this is not hard, and is left as an exercise). This is what justifies the notation for falling factorial: it is in some sense a discrete analogue of exponentiation!

The reason to bring

into the picture is that given the above identity for

applied to falling factorials, it is not hard to see that

is its own finite difference:

. (Yes, I know, there’s that pesky subtraction of types again; in the time-honored tradition of combinatorics we’ll simply pretend it makes sense and trust there is a way to make it more formal!) Solving this recurrence together with the initial condition

which we can interpret as the space of functions from

to Bool—that is, the type of sets over

, just like it should be! (Note that replacing falling factorial with exponentiation yields something which is its own derivative, with a solution of

—which indeed represents the species of sets, though it’s harder to see what

has to do with anything.)

Enough with the detour. What if we sum over

, with the property that

, but here I am a bit stuck. Trying to solve this in a similar manner as before yields

is certainly not a solution, since

. I think in this case we are actually not justified in subtracting

from both sides, though I’d be hard-pressed to explain exactly why.

ought to represent unordered tuples of

of any length—that is, the type of multisets over

. This is isomorphic to the space of functions

, specifying the multiplicity of each element. I claim that

is in fact a solution to the above equation—though I don’t really know how to derive it (or even what it really means).

The middle step notes that if you take one element away from the natural numbers, you are left with something which is still isomorphic to the natural numbers. I believe the above can all be made perfectly rigorous, but this blog post is already much too long as it is.