A couple weeks ago, Denise posted Puzzle: Crystal Ball Connection Patterns on her blog, Let’s Play Math. I had fun playing with it and thought I would demonstrate how to apply some high-powered combinatorial techniques to it (probably not what Denise had in mind!).

The setup is that there are

(distinct) friends who can talk to each other on the phone. Only two people can talk at a time (no conference calls). The question is to determine how many different “configurations” there are. Not everyone has to talk, so a configuration consists of some subset of the friends arranged in (unordered) conversational pairs.

Warning: spoilers ahead! If you’d like to play around with this yourself (and it is indeed a nice, accessible combinatorics problem to play with), stop reading now. My goal in this post is to have fun applying some advanced tools to this (relatively) simple problem.

One good approach at this point would be to derive some recurrences. This problem does indeed admit a nice recurrence, but I will let you ponder it. Instead, let’s see if we can just “brute-force” our way to a general formula, using our combinatorial wits. Later I will demonstrate a much more principled, mechanical way to derive a general formula.

Let’s start by coming up with a formula for

, the number of configurations with

conversations. The number of ways of choosing

pairs out of a total of

is the multinomial coefficient

. However, that overcounts things: it actually distinguishes the first pair, second pair, and so on, but we don’t want to have any ordering on the pairs. So we have to divide by

, the number of distinct orderings of the pairs. Thus,

Let’s do a few sanity checks. First, when

. We can also try some other small numbers we’ve already enumerated by hand: for example,

. So this seems to work.

people, there can be at most

conversations. So, the total number of configurations is going to be

We can use this to compute

for the first few values of

At this point we could look up the sequence 1,1,2,4,10,26,76 on the OEIS and find out all sorts of fun things: e.g. that we are also counting self-inverse permutations, i.e. involutions, that these numbers are also called “restricted Stirling numbers of the second kind”, some recurrence relations, etc., as well as enough references to keep us busy reading for a whole year.

We can describe configurations as elements of the combinatorial species

. That is, a configuration is an unordered set (

), where each thing can either be an unordered pair (

) of people talking on the phone, or (

) who is not talking.

We can now use the Haskell species library to automatically generate some counts and see whether they agree with our manual enumerations. First, some boilerplate setup:

Now we define the species of configurations:

Oh good, those numbers look familiar! Now, I wonder how many configurations there are for

We can also use the library to generate exhaustive lists of configurations, and draw them using diagrams. For example, here are all

. (If you want to see the code used to generate this diagram, you can find it here.)

And just for fun, let’s draw all

A general formula, via generating functions

Finally, I want to show how to use the species definition given above and the theory of generating functions to (somewhat) mechanically derive a general formula for the number of configurations. (Hopefully it will end up being equivalent to the formula we came up with near the beginning of the post!) Of course, this is also what the species library is doing, but only numerically—we will do things symbolically.

First, note that we are counting labelled configurations (the friends are all distinct), so we want to consider exponential generating functions (egfs). Recall that the egf for a species

that is, a (possibly infinite) formal power series where the coefficient of

is the number of distinct labelled

since there is exactly one set structure of any size, and

which is just the restriction of

term. Of course, we also have

. Putting this together, we calculate 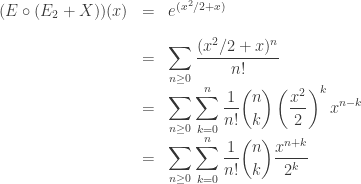 Ultimately, we want something of the form

, so we’ll need to collect up like powers of

. To do that, we can do a bit of reindexing. Right now, the double sum is adding up a bunch of terms that can be thought of as making a triangle:

increasing to the right. Within each column,

in our double sum are given by

. If we draw in lines showing terms that have the same power of

So let’s choose a new variable

. We can see that we will have terms for every

. We will also keep the variable

for our other index, and substitute

to get rid of

. In other words, instead of adding up the triangle by columns, we are going to add it up by diagonals.

that now turns into

to both sides and dividing by

(we can round down since

is an integer). Looking at the diagram above, this makes sense: the height of each diagonal line is indeed half its index. Rewriting our indices of summation and substituting

And hey, look at that! The coefficient of

is exactly what we previously came up with for